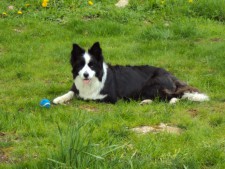 Every time she is fed (which at the beginning should be its’ daily quota split into about three or four meals a day) take her outside to where you want her to perform, and wait until she has and then praise her. You can say to her “do your business” or words to that effect, and she will associate that command with doing a poo or wee, you will then be able to take her outside and give her the command and she will know what is expected of her. Don’t speak to her until she has finished but when she has, praise her and give her a treat.  This may take a while but if you are patient it will happen. She will soon get used to going out when she has been fed. You must make sure that she is made to go outside after every meal. If you have any accidents, do not shout just take her outside to the usual place.

Before bed time take her outside to her toilet area and wait until she performs and then praise her. If she does not do it first time, go back inside, wait about ten minutes and try again. Keep doing this until she does and praise her. Shouting or rubbing her nose in it will not work and will only frighten your puppy. People say the dog knows she has done wrong because she cowers when they come in to a mess. This is not true, she does this because if you shouted the first time it happened you would have frightened her, she will remember that and will be able to read your body language that you are angry and when you are angry she gets a smack and her nose rubbed in it.

She does not know she has done anything wrong and does not feel guilty because it is natural for her to have a wee when she wants one. It is the unnatural environment of the house we place them in that makes it wrong in our eyes. She may look guilty when you come in but this is because she has got used to the consequences and that is why she cowers away from you. Just ignore the mess, clean it up and clean the area with a solution from the pet shop which cleans without leaving a smell, or use a Non- Biological washing powder solution. This will stop her being attracted to wee on the same spot again. Usually you will have an accident overnight so try to take her out as late as possible at night so that she does not have to hold herself too long and once again don’t shout. If she can’t go through the night without pooing give her last meal later (say about ten o’ clock) so she does not have to wait too long during the night. As soon as you get up in the morning take her into the garden or yard and encourage her to do her toilet.

During the day take her out every two hours for a wee if possible. If she thinks it is play time, put her on a lead and walk her round until she has wee’d. You can use the command “go for a wee” and she will again get used to what she has to do. Even if she is out playing in the garden do not presume that she will have a wee when she needs one. Remember when we were kids, if we were enjoying what we were doing we would put it off for as long as possible until we could not wait any longer and then it might too late. This is what happens with your pup when she is playing outside, you call her in and then she wee’s on the carpet and you can’t understand why, well that is why. So just remind her that she might need a wee by just calming her down and taking her for a wee in the usual way.